Built more than 100 years ago, today a former cold storage building in Chicago boasts stunning interior as well as exterior features. As originally built it had many features in common with our Ziock building. The property is called Dearborn Tower, 1530 S State St. 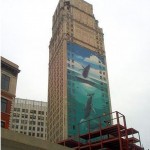 Here’s a challenge — believed to be the world’s tallest vacant building! Not only that, two previously announced attempts to restore it were unsuccessful. Does that sound familiar? Now, historic tax credits along with other financial sources will enable rehabilitation of the building.

Some projects make the Ziock Building look tiny. How about 163 acres of steel-making mills, furnaces and factories first started in 1857? Today the Sands Casino Resort Bethlehem boasts a casino with a 300-room hotel opening in 2011, conference center and 200,000 square-foot shopper’s paradise connecting the hotel to the casino.